Something tells me Baby Driver, Edgar Wright’s new film, is going to end up being ma-hu-sive. Check out this video to learn a bit more about what makes him so talented. I hear this film in particular has been a labour of love for Wright, and his first opportunity to fully take control over the writing and directing of a film just for himself. It should be a cracker.

On the flip side I recommend steering well clear of My Cousin Rachel. It tries to rely on intrigue and suspense to keep you interested, but the plot just doesn’t back it up. It ends up just being a bit dull. Irrelevantly, it also happened to be the first time I’d ever been the only one in a cinema screening. I felt a bit sorry for the staff who had to spend their night putting on a film just for me, and I wondered whether to tell them to switch it off and we could try again a different night. But in the end, the girl at the door looked used to it.

If you’re on Netflix, take a look at OKJA, a Korean-American adventure film co-written by Jon Ronson. Jon Ronson used to present the odd This American Life episode, and his bizarre, whimsical manner used to really grate on me. But I’ve since read a lot of his stuff (he wrote The Men Who Stare at Goats and So You’ve Been Publicly Shamed) and it became clear he’s a wonderful writer who shouldn’t be unfairly misjudged for his voice, and that I should get over it.

If OKJA is anything like the man himself, it’s likely to be intelligent, humorous, and slightly unhinged.

Check out Korean masterpiece The Handmaiden, a seductive, thrilling, beautiful film with about 30 plot twists and enough lesbian sex to keep anyone interested. Watching it reminded me, I must watch Old Boy, director Chan-wook Park’s most famous previous film. Looking at the trailer for Old Boy, it looks very similar to The Raid & The Raid 2, which are two of the most incredible, epically charged, high-intensity kung-fu films I have ever seen. I’m not usually one for pointless film violence, but there’s something so video-game fun about them, you can sit back and enjoy the choreography with some popcorn. They were directed by a Welsh guy as well. So there we go.

S-Town, the podcast from the makers of This American Life and Serial deserved all its many plaudits this year. The poignant tale of one man and his struggles with life, his home and his country, all wrapped up in a story which gently evolves over time, in a home-made slow discovery sort of a way, ends up being about as relevant a tale of this period in American history as anything you’re likely to hear.

27bslash6.com is a pretty ridiculous website, but for some reason it manages to have me doubled up in laughter often whilst struggling to breathe. I’d recommend just having a trawl through and you’ll pretty quickly get the idea if it’s for you. Created by an Aussie called David Thorpe it’s basically a series of mini stories of his dealings with various colleagues, friends or neighbours. I must admit I don’t know how many of the stories are really true, but I don’t think it really matters.

Anyone with even a passing interest in film should check out Every Frame a Painting, a YouTube channel set out like a university course with sort of video lessons, but much less dull than that sounds. Each episode focuses on a different part of the film-making process, or maybe a specific director and their style, it’s all very short and simple to follow, and cut with loads of film clips to make the videos both fascinating and entertaining. Unbelievable news.

Some favourite episodes include this episode on how the best visual comedy is created (includes a cracking explanation of why British comedies rule over their American cousins), or this one about Chuck Jones, the legendary Looney Tunes artist.

It’s difficult to watch Mackenzie Crook’s comedy The Detectorists, and put your finger on what makes it quite so enjoyable. Across two series, not a huge amount really happens and I can’t actually recall a moment I laughed out loud. But for some reason, it strangely compels you to keep coming back for more.

For every comedy show these days that seems to be brash and loud, The Detectorists is the complete opposite. It portrays the unfashionable side of British life: rural village England, where weird characters inhabit the world. You know the type. The bearded 60 year old who still runs the local scout hut, the ex-hippy who owns the bric-a-brac store that somehow still stays in business, or all those hobbyists who go to the car boot sales and school fetes up and down the country. I like being reminded that these people still exist, and that they are what makes Britain unique. Crook manages to portray them with a gentle love and affection, ending up with a really enjoyable comedy that just meanders along gently.

I assume it isn’t easy to get such a slow-burner of a comedy commissioned, but this is what the Big British Castle does so well. Crook’s the writer and director but on-screen Toby Jones steals the show as the detecting sidekick, leading a cast of slightly unhinged characters.

It’s been a bit of a sleeper hit, but from what I can tell anyone who has found The Detectorists seems to have loved it in the same way.

And “Did you watch University Challenge last night…?” is simply genius. 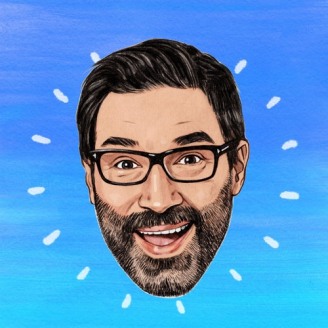 Dr Buckles is back! After 3 or 4 months away, the grand-daddy of British podcasting has returned with his weekly ramble-chats.

I’ve written before about my love for Mr Buxton; his presenting style makes his podcast feel like you’re catching up with an old friend, and mixed in with his slightly nutty humour, it’s clearly a recipe that works for enough people as he regularly sits up there with the most downloaded podcasts on itunes.

Each episode is setup as an interview with a guest – a writer, comedian, musician, presenter, or whoever – but in reality the conversations ebb and flow like a friendly chat with a next door neighbour, discussing any topic that comes to his or his guests’ mind. I’m not sure why this free flowing premise hasn’t been tried before, but maybe only someone like Adam could make it work.

His podcast with actor Bill Hader was also the inspiration for me getting off my arse and doing some writing (listen from 50 mins into the show, when they’re talking about the joy of sharing recommendations with each other), so there’s also that, which is nice.

With the news The Trip is coming back for a third series, it’s worth recommending the first two series to anyone that hasn’t seen them.

Rob Brydon and Steve Coogan are both brilliant as the two main characters, playing what are essentially exaggerated versions of themselves, under the premise they’ve been asked by the BBC to go on the road to film a travel documentary. Like all those years ago when first watching The Office, you can’t help wondering whether the show is scripted or what is just the two comedians let loose to improvise, riff off each other and have a bit of competitive one-upmanship in the process. What’s clear though is that Brydon and Coogan natural chemistry and skills as impressionists mean it doesn’t really matter. When the two of them are left to sit around chatting to each other in various hotels and restaurants around the country, what you end up with is a load of laugh-out-loud moments and many quotable lines (“Gentlemen to Bed! For we rise at Daybreak“).

While the show is mainly comical, it’s also finishes up as quite a moving tale of two middle-aged men coming to terms with their age and position in life, which serves as a nice contrast and gives the show some depth.

The Trip 2, written after the success of the first series, basically takes the same premise and repeats the formula in Italy rather than the UK. It’s still good, but without the freshness or as many good lines as the original. Looking forward to seeing whether there are enough new ideas in the The Trip 3 to carry a third series.

Navigate via the folders below.

My Tweets
Recommendable
Create a free website or blog at WordPress.com.